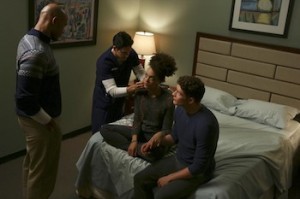 I definitely feel the exact same way as Miranda. Tuesday night’s episode of Ravenswood, “I’ll Sleep When I’m Dead” really made me not want to sleep, ever! Clowns freak me out, and after Tuesday’s episode, they will continue to freak me out.

“I’ll Sleep When I’m Dead” began with Caleb taking the jar Miranda got from Beatrice going straight to Raymond. Caleb was about to open it but Raymond stopped him. Caleb threatened Raymond and Raymond wasn’t scared one bit. Then a jar exploded, and the look of fear came over Raymond.

“Unseen forces” was burned into the wall in Caleb’s room. It turns out “Unseen Forces” was a book. The whole title of the book was, “Unseen Forces: An Unabridged & Personal History of Ravenswood Township” written by Its Native Son H.A. Armitage. Caleb opened up Miranda’s jar and she was able to walk out of the cemetery and go around town with him. Yay!

That day, Remy went to the Sleep Disorder Clinic. Simon and Remy met with a doctor and she said that everything Remy was dealing with right now could be traced back to a nightmare she had when she was a little girl. Interesting. When Remy was 7, she drew a picture of a dark figure holding a knife. The same knife with the 3 sided blade she saw on the night the pact was signed. How could any of this be possible?

Olivia went to the hospital to try and get into Springer’s room to see him with Tess by her side. They made it to his room, when Springer’s mother Dolores intercepted them. Dolores wasn’t a fan of the Matheson family and made her feelings quite clear to Olivia. Simon came by and Dolores warned him to stay away form Olivia or he’d lose everything.

So back at the Sleep Clinic, Remy got all wired up before she went to sleep. Remy began to dream and she “woke” up in her childhood bedroom and saw her young self sleeping. While in this state, she saw the dark figure with the knife try and attack her young self. The figure grabbed Remy but she woke up before it went any further. Later on that night, Remy went back to sleep all wired up and this time she woke up and saw a clown. As if I wasn’t already freaked out by clowns. Remy’s brain activity was going crazy and Luke ran in and tried to wake her up. The doctor’s came in and pulled Luke away. Good! We were just getting to the juicy part of Remy’s dream. Remy was having a tea party with the creepy man in her drawings. The creepy man turned out to be the Preacher, Gabriel Abaddon. GASP!

Abaddon: “Promises were made, debts were owed.”

Abaddon told Remy she was never supposed to see anything. Remy was full of fear, that’s why she was chosen. Abaddon wanted to know how did Remy witness the pact? Miranda got into Remy’s dream, because she saw Remy in the kettle and knew she was in trouble and smashed a lamp on Abaddon and Remy was able to escape from him and she finally woke up from her dream. Abaddon got to Miranda but she dragged him with her. Miranda may have gotten rid of Abaddon in Remy’s dream, but I doubt he’s gone for good.

Olivia went inside Springer’s hospital room but was interrupted when a doctor came in to check on him. It was a close call, but Olivia was able to hide. She came back out and was able to get into the bag with all of Springer’s belongings. Olivia got Springer’s phone, and began to listen to a recording. He didn’t have a password on his phone? Sloppy Springer. Anyways, the recording was the conversation between Springer and Dillon, and Springer admitting he planted the knife. The recording was choppy so Olivia didn’t hear the other voice on the recording. Too bad, but when Olivia met up with Caleb, he agreed to see if he could fix it so they could hear the other voice. Miranda joined the two, but things got weird real fast. Miranda saw her arm rotting and she saw creepy child Max and began to yell bloody murder.

When Caleb and Miranda went to the school to try and get the book, “Unseen Forces” they ran into Mr Hottie teacher Benjamin Price. He wasn’t pleased to find Caleb in his office and told him that the book he was looking for wouldn’t be very helpful. Apparently Armitage was an eccentric and believed in ghosts.

Back at the hospital, Raymond Collins was looking for Springer. Tess and Olivia were freaking out when they saw Raymond in Springer’s room. All of a sudden alarms were sounding and Code Blue was called. It was only a blood clot and Springer was still alive.

Olivia went back, yet again to Springer’s room to put back the cell phone. Springer woke up and confessed to Olivia that Dillon made him do it, leaving Olivia shocked.

I really liked this episode. It seems like we’re going somewhere with the story. What did you guys think of the episode? Sound off below!