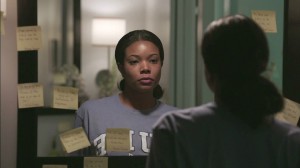 Mary Jane has risked quite a bit in having an affair with Andre, as her conservative family likely wouldn’t have anything else to do with her if they found out and she would be branded as an adulteress in the eyes of TV executives and viewers, spelling the end of her promising career if word got out that she was seeing a married man. But she’s put all this on the line due to the feelings she has for Andre; although she might not be ready to walk down the aisle just yet, she knows that he’s the one man who gets her and that the electricity that exists between the two isn’t there for no reason. However, one thing she hasn’t yet thought about is what Andre’s doing for her, what he’s sacrificing in order to be with her – and only her.

On the next episode of Being Mary Jane, Andre has continued to say all the right things to Mary Jane before going right back home to Avery, even bringing funny anecdotes that the two of them create back to Mary Jane when he needs a break from a life of domesticity. While she knows that he might not be able to leave Avery right now, it’s a whole other beast for Andre to flit back and forth between the two women without a care in the world, telling Mary Jane that she’s the only one for him while always choosing Avery over her. Mary Jane, meanwhile, has seemingly always put Andre above all else in her life, making his choice of repayment, actively boxing her in as his second choice and his fallback plan for when he’s horny or things get bad with Avery, all the more cutting. But is Mary Jane going to call him out on just how low he makes her feel?

Elsewhere on Being Mary Jane, Kara’s changes prove too much for Mark, while Mary Jane meets a man online.

Do you think that Andre is sending Mary Jane mixed messages? Should Mary Jane have been meeting men and dating around all this time? Is this the end of the road for Mark at the network?