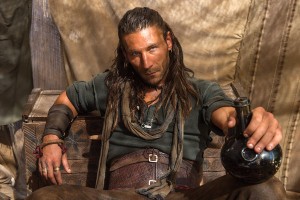 Starz has released a nine-minute inside look at upcoming drama Black Sails, which will blend historical figures and literary characters from Robert Louis Stevenson’s Treasure Island. In the promotional video, the history behind the pirate myth is discussed, including how the series will adhere more to the darker reality of the world in which figures like this lived than the Hollywood makeover they’ve received, as well as the main characters we’ll be following throughout the eight-episode first season. Also brought up is the vast scale of the show’s South African production, including the authenticity of the weaponry and fight training that the actors had to undergo before filming.

Set in 1715, Black Sails tells the story of the Golden Age of piracy through the eyes and experiences of fearsome Captain Flint (Toby Stephens), a man charged with protecting the sanctity of criminal haven New Providence Island. The last place that hasn’t been touched by English rule, New Providence is the only area where a pirate can be a pirate and where their lifestyle is celebrated rather than looked down upon, but after the falling out with the English, rights to the land and all the financial opportunities it presents are up for grabs.

In addition to Stephens, Black Sails will star Mark Ryan as Quartermaster Gates, an intermediary between Flint and the rest of the crew; Tom Hopper as Billy Bones, a trustworthy crew member; Hannah New as ambitious Eleanor Guthrie, the most powerful person on New Providence; and Zach McGowan as Captain Charles Vane, Flint’s most dangerous rival.

Black Sails is set to premiere Saturday, January 25th at 9:00 on Starz. You can check out an additional inside look at the pirate drama here, as well as an extended look at what went in to making one of the ships used on the show and a teaser about the pirate code of conduct below.

Will you be watching Black Sails?