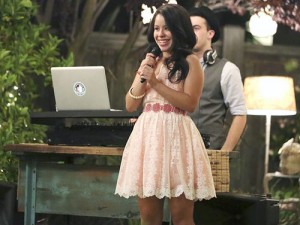 ABC Family has made the first 10 episodes of acclaimed family drama The Fosters available on ABCFamily.com and through the ABC Family app ahead of the resumption of its first season next month. Additionally, a contest is being held where fans can submit their favorite moments from the first half of the Teen Choice Award winner’s first season on the show’s Facebook, Twitter, Instagram, and/or Pinterest pages. The winner will receive a trip for four to Los Angeles to hang out on the set of The Fosters.

When The Fosters returns to complete its first season, the family will be as broken as it has ever been, as Callie has ran away to Indiana to be with Wyatt after kissing Brandon at the wedding reception. The move, out of shame for what she did and desperation to keep Jude in a place where he would be well taken care of, came on the heels of Lena and Stef offered to adopt both her and Jude, making her decision to move across the country without telling them all the more painful. After the family got through the shooting and had the wedding, things looked to be on the up and up, their household gelling even more with the addition of Callie and Jude. However, arguably the roughest waters they’ve ever faced are coming up, with Brandon having to face the music for the kiss, Jude dealing with abandonment issues from his sister’s sudden disappearance, and Mariana about to lose her best friend to a foreign country.

The Fosters returns Monday, January 13th at 9:00 on ABC Family. You can check out a recap of the first 10 episodes of the series here, as well as spoilers from the winter premiere here.

What do you think will happen during the winter season of The Fosters? Will you be catching up before the season resumes or convincing a loved one that they should give the show a try? Which moment from the first 10 episodes do you consider to be your favorite?