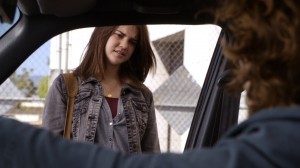 Have you heard good things about The Fosters but don’t have time to watch the show’s first 10 episodes? Did you watch the show this summer but forgot a few key details? Well, you’re in luck, as ABC Family has released a video recap of the summer season of The Fosters, which lays out the premise of the series and where each character is at going into the next 10 episodes.

When we last left The Fosters, Callie had ran away to Indiana with sorta-boyfriend Wyatt following an inappropriate kiss with Brandon and a confrontation with Jude. However, she didn’t tell anyone where she was going, leaving in the middle of the night, meaning that once Lena and Stef figure out that she’s gone, they’ll stop at nothing to not only track her down, but bring her back home. It’s not exactly the reaction they expected after offering to officially adopt Callie and Jude and in order to better understand why she would pull such a stunt, they’re going to have to be clued into the connection she has with Brandon and how that manifested itself the day of the wedding. Instead of getting a romantic honeymoon to put a positive coda on a trying last few months, Lena and Stef are now faced with a broken home situation that, if left untreated, will only get worse. Are they going to be able to convince Callie to come back home?

The Fosters returns Monday, January 13th at 9:00 on ABC Family. You can check out spoilers from the winter premiere here, as well as a recap of the summer finale here.

How long will it be before Callie’s back at home with Lena and Stef? Is Mariana going to be okay once she learns about Lexi’s trip to Honduras? Can Callie ever repair her relationship with Jude after leaving him without saying goodbye?