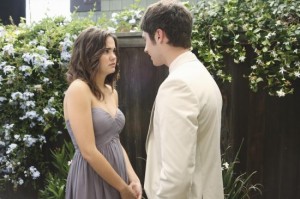 ABC Family has released descriptions for the winter premieres of Switched at Birth and The Fosters. While Daphne and Bay work at a free clinic and take art classes at the local college, respectively, the Fosters deal with the fallout of Callie’s decision to move to Indiana without telling anyone. The duo join a crowded January lineup for the network, which includes the returns of Pretty Little Liars, Ravenswood, Melissa & Joey, and Baby Daddy.

Listed below are the episode titles and descriptions for the winter premieres of Switched at Birth and The Fosters.

Switched at Birth – “Drowning Girl”
Senior year means big changes for Bay and Daphne, as the Carlton School for the Deaf receives an influx of hearing students who are not happy to be there. Daphne begins working at a free clinic as part of her probation from the Senator Coto blackmail scandal, and bonds with a pre-med student (guest star RJ Mitte, Breaking Bad) with a spinal injury. Bay is inspired by her art teacher (guest star Sandra Bernhard, Roseanne) and surprised by her jock classmate (guest star Max Adler, Glee), when she takes an art class at a local college. Toby tries to unite a divided Carlton by coaching girls’ field hockey, and Kathryn dips her toes into new territory when she makes friends with a gregarious tap dancer (guest star Alec Mapa, Ugly Betty).

The Fosters – “The Honeymoon”
The repercussions of Callie’s decision to run away impact every member of the Foster family, including newlyweds Stef and Lena, who had offered to adopt the troubled teen.  Both Jude and Brandon struggle with their own personal guilt about her running away.  Mariana inadvertently discovers the whole story about Lexi’s upcoming trip to Honduras.

Will working at the free clinic do Daphne a lot of good? Is Toby’s new position as field hockey coach going to unite a severely fragmented Carlton? How will Mariana react to the news of Lexi’s trip to Honduras?