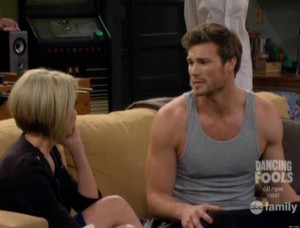 ABC Family has announced that Melissa & Joey and Baby Daddy will be having their winter premieres on Wednesday, January 15th. While Joe makes a rash decision when he finds out that Austin wants to give things another try with Mel, Ben and Riley try to acclimate to life as a couple with expectedly embarrassing results.

Listed below are the episode descriptions for the winter premieres of Melissa & Joey and Baby Daddy.

Melissa & Joey – 8:00
In picking up where the summer cliff-hanger left off, Joe rushes home to tell Mel that he has feelings for her after their romantic night together in New Jersey. When he arrives, he’s shocked to find Austin (guest star Trevor Donovan) has shown up and wants to give his relationship with Mel another try. Deciding he can’t stay and watch them fall in love all over again, Joe quits. Meanwhile, Lennox plots to get Joe and Mel together and Ryder gets sick from his own cooking.

Baby Daddy – 8:30 (“The Naked Truth”)
Ben and Riley try to transition from friendship to being a couple, which results in a hugely embarrassing moment for Riley. Ben is still angry with Bonnie for bringing Emma’s mom Angela (guest star Mimi Gianopulos) back into their lives. Angela tries to show Bonnie she’s a capable mother while hoping for a fresh start with Ben. Meanwhile, Tucker tries to help Danny get over Riley and Amy with his five-step “T.U.C.K.E.R.” break-up recovery system.

In addition to Melissa & Joey and Baby Daddy, the likes of Pretty Little Liars (January 7th), Ravenswood (January 7th), Switched at Birth (January 13th), and The Fosters (January 13th) will be having their winter premieres in the first month of 2014. The following month, Twisted returns for the second half of its first season. You can check out a recap of the Baby Daddy summer finale here.