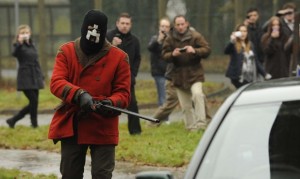 For the final Best of 2013 article, it’s time to look at the shows that didn’t make the top 20 list but that still deserve attention. As has been mentioned before, television is in a overwhelmingly potent period right now, so if I made another 10 “top 20 of 2013” lists, any of these ten shows could have feasibly been included and not looked out of place. Each of these were actually in consideration for a numeric ranking in the main list that was compiled this year, but due to one factor or another, they were knocked out of contention and yet, I was fond of them enough to want to give them their due for being able to differentiate themselves in a time where it’s easy to blend into the vast television landscape.

Plus, with year-end lists highlighting the same selection of shows, these are 10 fairly low-key offerings that deserve to be included in the retrospective looks at 2013 television, even if they didn’t make as much noise as shows that have gotten more accolades and press coverage. While a show capturing the minds and keyboards of the journalistic elite doesn’t make it inherently overrated or undeserving of praise, hivemind can stifle conversation and leave deserving entities out in the cold in favor of page hits and critical consensus, so this list is a (minor) way of trying to combat that and recognizing the depth and breadth of the television industry in 2013.

Unlike the top 20 list, these 10 shows are not ranked in order of preference; instead, they’re listed alphabetically. However, as with the top 20 list, episodes that are either best representative of the show or personal favorites are listed, with clips and/or trailers linked accordingly.

Black Mirror
Essential Episodes: “Fifteen Million Merits”; “The Entire History of You”; “White Bear”
Though prone to preachiness and a sense of self-satisfaction in its writing, techno-anthology series Black Mirror was still a thoughtful, often times startling, always unnerving look at the potential fates that await modern society should it stay on its current trajectory. Addressing issues of punishment in the criminal justice system, the relationship between the media and politics, and advances in technology cutting into one’s own humanity, the show could sometimes be too smart for its own good, yet its stirring imagery and assured point-of-view made for enlightening, maddening, and thought-provoking television that will stand the test of time.

Family Tree
Essential Episodes: “Treading the Boards”; “Civil War”; “Cowboys”
Quiet, quirky, and quietly quirky, Family Tree initially seemed like one of the most unassuming shows on premium cable this year, with its open-hearted lead performance from Chris O’Dowd, small plot stakes, and even smaller regular supporting cast. However, the deeper the show got into its first season, the more the characters themselves and the world itself opened up, as lonesome Brit Tom Chadwick used his quest to color inside the lines of his family history to figure out who he is and what he wanted from his life. It was a slow burn of a journey that made him realize that he might just have a chance to be okay.

Hart of Dixie
Essential Episodes: “Islands in the Stream”; “Help Me Make It Through the Night”; “Miracles”
As warm and inviting as a humid Alabama night, Hart of Dixie is the show on television that makes me the happiest. Every week the show is on, I know I’ll be spending 42 blissfully southern friend minutes wondering about how the latest hijinx in BlueBell will play themselves out, but what has set the show apart even more is how they’ve turned what was their weakest link in Jaime King’s prissy debutante Lemon Breeland into its greatest asset. Hart somehow managed to deconstruct one of its main antagonists and slowly build her back up into the show’s most sympathetic character, a woman looking for a sense of purpose and identity after spending nearly two decades on a predetermined path that she didn’t even want to be on.

Lost Girl
Essential Episodes: “Fae-ge Against the Machine”; “Ceremony”; “Hail, Hale”
Season three of Lost Girl gained back a lot of the focus that was lost during the extended second season by having a clear cut and defined objective (Bo preparing for and eventually undergoing the Dawning) that allowed the rest of the show’s cast to work around (and with) her. The Dawning was a way to further flesh out what it means to be a Fae, highlighting Bo’s personal evolution while resulting in some fun set pieces and an impressively psychological look at the character we had seen find her bearings over the past two seasons. Still retaining its playful dialogue and bubbling chemistry between its ensemble, especially with the introduction of Valkyrie double agent Tamsin, Lost Girl was very much Lost Girl during season three, only a better, strong, and deeper version of itself.

Magic City
Essential Episodes: “World in Changes”; “Sitting On Top of the World”; “And Your Enemies Closer”
With some of the best cinematography and art direction on television, Starz crime drama Magic City would be worth watching just to see what kind of perfect visual storm would be created next. Luckily, the show continued the trend it started at the midpoint of its first season when it began giving the rest of the world weight beyond gorgeous dresses and fancy cars, as season two focused on a man growing tired of the way he was being pushed around in the city that he runs and making the type of plays necessary to preserve his power. It was a season of chess moves and second guessing, of botched alliances and questioned familial loyalty, of opportunity and loss. And yes, beautiful scenery to boot.

The Carrie Diaries
Essential Episodes: “Pilot”; “Identity Crisis”; “Strings Attached”
Earnest, intelligent, and dripping in sweetness, The Carrie Diaries is a show about growing up and finding yourself that never patronizes and doesn’t diminish what it means to be a teenager. As much an exploration on being a certain age in the 1980s as it is a Sex and the City prequel, the series went from an insular look at a small town girl looking to burst out in season one to a wider-reaching story of someone who found their dream while on the cusp of adulthood, a natural evolution rooted in character vs. plot mechanics. Even with the Sex connection, though, Carrie proved that she can truly stand on her own.

The Wrong Mans
Essential Episodes: “The Wrong Mans”; “Bad Mans”; “Running Mans”
Part action movie, part dynamic thriller, and part uproarious comedy, British import The Wrong Mans was another Hulu acquisition that got the exposure to a wider audience that it deserved. Its twisty narrative was never gratuitous or convoluted, a feat considering how much ground was covered in six episodes; its moody visual style made the series quite distinctive and made the more serious material stick; its performances were excellently calibrated to both the material itself and the tonal leaps that the show could make, stars Matthew Baynton and James Corden shining as two pop culture-loving everyman caught up in a conspiracy they never thought they would be involved with.

Time of Death
Essential Episodes: “Maria & Lenore”; “Maria & Cheyenne”; “Maria & Nicolle”
The only reality/alternative series on my list, Showtime’s Time of Death was an unflinching look at the good, bad, and ugly of terminal illness, following numerous people who were in their last days as they came to terms with death, their past actions, and what life would be like for their loved ones without them. Brave and oftentimes powerfully emotional, the series alternated between being a devastating glimpse at the toll illness can have on a family and a life-affirming portrayal of people who, despite everything going on around and with them, never gave up on living. It was a strong addition to Showtime’s slate of unscripted shows and something that even those who haven’t been directly impacted by terminal illness can find value in.

Web Therapy
Essential Episodes: “Who Doesn’t Love Musicals”; “Husband Hunting”; “Affairs to Remember”
One of the joys of Web Therapy is watching Fiona manipulate people into doing her bidding. As narcissistic, self-absorbed, and petty as she may be, it can be extremely impressive to watch her wriggle her way out of even the tightest of situations, which happened this season with the specter of the campaign finance investigation lurking over both her personal and professional lives. But what differentiates this season of Web Therapy is that Fiona ultimately doesn’t get away with it; she’s so used to being able to bend the universe to her will that facing the type of resistance she did from her mother, including a shocking season finale twist, was something that never crossed her mind, so the impact of said twist on the show itself and the show within the show was acutely and thoroughly sound.

Zach Stone is Gonna Be Famous
Essential Episodes: “Zach Stone is Gonna Go Missing”; “Zach Stone is Gonna Be Scary”; “Zach Stone is Gonna Be Famous (No, Really)”
The spiritual successor to HBO cult classic The Comeback, Zach Stone served as both an indictment of and commentary on instant stardom and the state of reality television in 2013. Using his dreams of becoming a celebrity to avoid making major decisions in his life and further remove himself from who he was in high school, Zach was a protagonist who, while it could be difficult to sympathize with at times due to the severity of his actions, was specific enough in his eccentricities/insecurities while also representing the type of person who grew up in a society with seemingly more cameras, media sources, and celebrities who are famous for being famous by the second. With its bold series finale that called into question everything that happened during the season, Zach Stone was arguably the most underappreciated series of 2013.