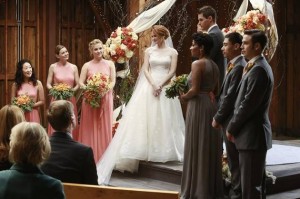 Get up, Stand up was the 12th episode of Grey’s Anatomy Season 10, which was aired on December 12, 2013. The April’s wedding episode was the mid-season finale and the last one to be aired till the next year. But, in case you missed out the mid-season finale, here’s what all you need to know.

April Kepner is getting married and everyone at the Grey Sloan Memorial is coping up their lives along with her wedding plans. On the other hand, our good old Kepner is flipping our big time as the D-Day has finally arrived and on the other, Derek has been working with an organization, who, now wants to use his name in order to support their work, to which Derek refuses as they aren’t ready to get to the point. Finally, Jo’s tireless efforts of bring Alex close to his Dad have started working, only till he starts talking ill about Karev’s mother. Fas who have been worried about Bailey would like to know that Miranda feels that somewhere its Ben’s fault that her OCD got worse. She tells him that her OCD symptoms augmented only after he came home, quitting surgery.

Being April’s bridesmaids, its high time Meredith and Christina sort out their differences. They do have quite a heated argument while having their bridesmaids dress fittings but when they meet each other at Kepner’s wedding, both accept that they are different people, with different point of views and they can work on getting along with each other. Meredith admits that the way Christina balances her life and has been successful consistently, she’s been jealous of that and to that, Yang also confesses that Meredith is no less a surgeon and is a great mother too. However, we don’t get to see much of the duo as April cuts the moment short by expressing how important is the day for her and people should be making her special.

Back in the hospital, it proves to be one of Shane’s very bad days as Webber takes over his surgery as someone seemed to be too full of themselves. Well, the episode adds a lot to make it a mid-finale hit, which includes Shepherd getting a call from the United States’ President and Jackson standing up and confessing his love to Kepner in front of everyone, including Stephanie. Wow, we really saw that coming, dodn’t we? Great timing Jackson!