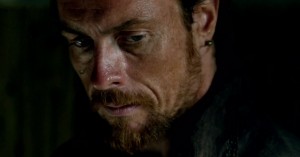 Starz has released a behind the scenes look at upcoming pirate drama Black Sails, as well as a series of character introductory videos. Executive produced by Michael Bay and set in Nassau, Bahamas, the series takes place 25 years before the events of Robert Louis Stevenson’s Treasure Island and centers on Captain Flint (Toby Stephens), the most feared pirate sailing the open seas. He takes on a new addition to his crew in John Silver (Luke Arnold), which comes in handy because the pirate control over currently unregulated New Providence Island, one of the only places not under colonial rule, has been threatened. In order to preserve the criminal haven that they’ve grown to love so much, Flint is going to have to strengthen his ranks and hope that his men are strong and savvy enough to keep New Providence from falling into the wrong hands.

In addition to Stephens and Arnold, Black Sails stars Zach McGowan (Shameless) as Flint’s rival Captain Vane; Hannah New (Maleficent) as Eleanor Guthrie, in charge of the smuggling operation at New Providence; Jessica Parker Kennedy (The Secret Circle) as Max, a prostitute who gets exposed to the darker parts of the island; Clara Paget (Fast and Furious 6) as beautiful but cold-blooded Anne Bonny; and Tom Hopper (Merlin) as Billy Bones, boatswain of Flint’s ship.

The series premiere of Black Sails is set to air Saturday, January 25th at 9:00 on Starz. The show has already been renewed for a second season, which will consist of 10 episodes and premiere sometime in 2015, due to strong reception at a San Diego Comic-Con screening.

Will you be watching Black Sails? Do you think the behind the scenes video makes you more likely to watch the show? Which of the characters seems to most promising from their introductory video?