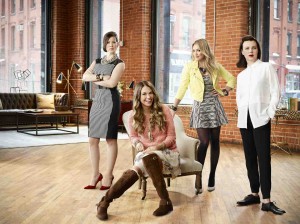 “We are all excited about the premiere on January 13th,” said Larry W. Jones, President of TV Land. “This show is sleek, alluring and all-around fantastic. The characters are funny and relatable, Darren is full of creativity and the sexy cast is bringing their A-game. The end of every script leaves us wanting more.”

Created by Darren Star (Sex and the City), Younger tells the story of single 40-something Liza (Foster), who attempts to get back into the working world after taking time off to raise her child. However, she finds it difficult to find a position at her age, so she decides to give herself a makeover in order to appear younger and land a position that will help her support her family. In addition to Foster, Younger stars Hilary Duff (A Cinderella Story), Debi Mazar (Entourage), Miriam Shor (GCB), and Nico Tortorella (The Following).

Younger joins a growing scripted slate for TV Land, which includes Hot in Cleveland and The Soul Man. The network picked two new comedies – Impastor, about a man posing as a gay priest; and Teachers, which centers on six elementary school teachers – up to series yesterday evening, with both to premiere in 2015.

You can check out the first trailer for Younger below.

Will you be watching Younger? How long do you think a show with this type of premise can sustain itself? Are you excited to have Foster back on television after the cancellation of Bunheads?