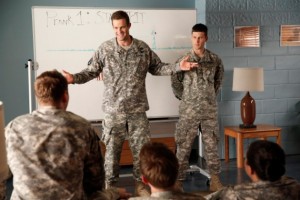 It’s finally official – Enlisted will not be returning to the Fox lineup.

The network has confirmed the cancellation of the cult-favorite comedy, a move long seen coming – unfortunately – by many.  The Friday night laugher grew a loyal audience of fans who have been anxiously awaiting for the show to be given a second chance – and decent time slot.  Sadly, it won’t be happening.

Fox has also cancelled Seth MacFarlane’s Dads.  Slightly surprising, as despite poor critical reception the show has been seen as likely to be renewed by the net that has stood by the show since its all-around offensive pilot episode.

These cancellations leave Brooklyn Nine-Nine as Fox’s only surviving freshman comedy this season.

Will you miss these comedies?

The Hollywood Reporter is also reporting that Fox has pulled the plug on Greg Kinnear-starrer Rake.