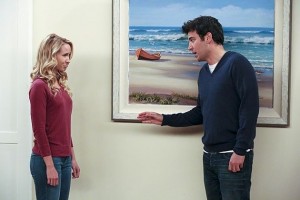 Remember last week when I said I was interested in seeing how Lily knowing about Marshall’s judgeship would play out?  That’s exactly what we saw in last night’s episode, “The Lighthouse” – or part of it – and it was great.

Lily had a great running theme in this episode, smashing whatever glass she was holding in anger each time some sort of judgeship-related word came up  (“judge,” “court,” “trial”), whereas Marshall spend the time angry with Daphne for letting the news out.  The two, still driving cross country, take a pitstop at Ted’s mother’s house, cueuing the return of his mother and her rather hippy second husband, Clint.  If you’ll remember back, Clint has an abject need to help people, even has a song for it (“gonna resolve some conflicts”) and ends up hiding out in the back of Marshall and Daphne’s car when they leave.

His presence backfires on him, though oddly works for the traveling duo, as their mutual disdain for the man becomes something that they actually agree on.  However, it is when they’re waiting for Clint to meditate on the side of the road after they frustrate him, that Marshall finally looses it.

Daphne attempts to lecture him that he’s too caring for everyone else whereas people like herself are, well, out for themselves.  Marshall finally snaps and  yells at her for what she did to him.

Meanwhile in Farhampton, Ted struggles with Curtis the desk clerk (Roger Bart’s return to the role) who won’t let him go up to the Lighthouse, because in his opinion it’s far too romantic for someone so lonely as Ted.  He manages to bring Cassie, however, the girl he spent the entire night consoling, even carrying her all the way to the top after she twists her ankle.  Yet, unfortuanately for Ted things do not go as planned – as they often do when he goes to the right place with the wrong girl.

But fear not – for the lighthouse storyline also gave us a glimpse into the future.  Ted brings the mother to the top and proposes.

The episode also saw the feud between Robin and Barney’s mother Loretta hit a head.  Robin walks around flaunting Loretta’s “blouse that she absolutely loved,” won in the poker game three weeks ago.  They two end up in a showdown over who can make the best scrambled eggs – Loretta or Robin’s [missing] mother.  After the entire hotel deems Loretta’s amazing, Robin is determined to show her up, but…can’t cook.

It’s after Loretta tells her son that she’s concerned for how Robin will care for her grandchildren that Barney tells her the truth – Robin can’t have kids.  We even see a flashback to when Barney found out.  Loretta softens to her soon-to-be daughter-in-law, consoles her when they find out that Robin’s mother was too scared to get on the plane to come to the wedding, and tells her that she’s “mom” now.

Needless to say, a lot happened in this episode.  I also found that I very much enjoyed it.  Not only was it funny in the usual way that the show is funny, each storyline (Marshall/Daphne’s, Ted’s, Barney/Robin’s) was appropriately touching and saw some forward movement for the characters.  It might be safe to assume that Lily and Marshall’s relationship will be a bit tense for a while, and we could see Daphne testing her limits with now-assertive Marshall.  I’m glad to see that this storyline, while slightly tired as it is literally two people trapped in a car, has some depth to it as well.

On a related note, can I mention how perfect it is that Marshall’s driving music is still “(I’m Gonna Be) 500 Miles”?

Also, how adorable is baby Marvin?

The episode could also be subtitled “How we didn’t meet Robin’s mother,” unfortunately.  I know for a second or two I was excited at the prospect of meeting her, and like Robin I was bummed to find out that she didn’t make it on the plane.  Though I enjoyed the way this absent character was set-up, through future-Ted explaining that they know very little about Mama Scherbatsky.  I hope that I’m not the only one still hanging onto the hope that she’ll find a way to Farhampton by the end of the season.

And of course, I cannot let this review go without noting the perfect moment between Ted and the mother, whose character I find that I absolutely love, even though we’ve seen her for so little screentime.  For now, I’m enjoying the little inserts of she and Ted’s relationship and how they introduce her to the audience before our characters really get to know her.

But really, Ted has to run into her at some point, soon right?  The hotel certainly doesn’t seem that large.

Lines to note this week both come from Barney:

“IN-LAWYERED!” – [in telling his mother that she’ll be legally obligated to like Robin]

“Maybe we should’ve read up on this town before we booked our wedding.” – [in reference to the hotel’s guests being so fanatical about Loretta’s scrambled eggs and the egg-off]

What did you think of “The Lighthouse”?