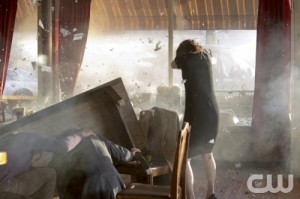 As a result of teleporting with Astrid at the exact wrong moment, Stephen inadvertently sent his best friend down to the abandoned subway station that John, Cara, and the other Tomorrow People had been itching to live for years. Ultra is still too powerful, too all-seeing, too much of a threat for Astrid to be able to live above ground, so unfortunately, until a deal can be brokered or Ultra takes on some serious damage, she’ll be spending the foreseeable future in a place she never thought she would end up. Fueled by his guilt over dragging his friend into this and his desire to pay Ultra back for all the carnage they’ve inflicted on his people, Stephen will do anything he can to get Astrid back into the normal life she deserves, even if it means dealing with The Founder.

On the next episode of The Tomorrow People, Stephen gets approached by The Founder when a rogue break-out pops up on Ultra’s radar. He is to bring them in through different channels than other break-outs have been brought in due to the fact that the break-out is The Founder’s daughter Cassanda. Though Stephen constructs a deal that would effectively exchange The Founder’s daughter for Astrid’s freedom, he might have second thoughts when her actually meets Cassandra and learns about how much of a monster her father truly is. Stephen already knows that The Founder is not someone to mess with and that Ultra has been responsible for countless atrocities, so when he gets even more clued in on the extent of The Founder’s viciousness, can he find a way to save both Cassandra and Astrid?

Elsewhere on The Tomorrow People, a clash between John and Cara causes the latter to issue harsh punishment for the former, while Stephen learns a surprising secret about his mother.

Will Stephen decide to bring in The Founder’s daughter as a way of ensuring Astrid’s protection? Should he trust that The Founder would live up to his word in a way that Jedikiah didn’t? What type of surprising secret will Stephen learn about his mother?