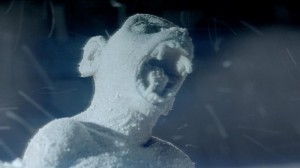 Major Balleseros nearly made it out of the Arctic base and back into civilization with the frozen head of infamous Dr. Hvit, but once Daniel and Alan found out that he was responsible for Doreen’s murder, he was taken down and left for dead in the cold. However, Daniel didn’t deliver a finishing blow to the military man and with everything that’s been going on around the base, it seems likely that the scientists working feverishly to control the outbreak are not alone, that there’s some shadowy figure monitoring their every move and making sure they never find out the truth about what happened when the virus broke out and why it was unleashed to begin with. But has that figure finally decided to make themselves known?

On the next episode of Helix, the body of Major Balleseros gets moved by a mysterious figure with a seemingly deformed face. With the virus having began before the CDC team arrived in the Arctic, there’s a possibility that the figure who abducts Balleseros is someone who survived the virus and lived to tell the tale or someone who was kicked out of the facility and adapted to the hellish conditions outside, which wouldn’t be that much of a surprise considering how those who work at the facility have been less than honest about anything concerning the origins of the virus. Those still in the base are currently wrapped up in figuring out the makeup of the virus and how they can get Level R reopened, but as Alan mentioned in the most recent episode, the virus might not be the most worrisome thing for them right now, not when Hatake refuses to be straightforward with them, not when their own are turning up dead, and not when they have no means of communicating with the outside world. If they have to deal with an outside threat on top of this, the chances of Alan, Sarah, and Julia making it out of the Arctic alive and sane will take a serious hit.

Elsewhere on Helix, Alan and Sarah make progress toward decoding the virus, while Hatake secretly “cures” Julia before the corporation’s helicopters arrive.

Who do you think moves Balleseros’ body? How close will Alan and Sarah get to decoding the virus before extenuating circumstances get in the way? Is Hatake’s “cure” for Julia just to buy himself more time with the corporation?