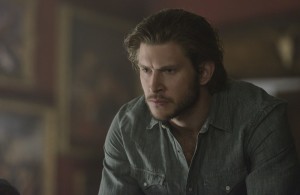 Ever since she returned to Stonehaven, Elena has been apprehensive about getting too close with Clay. Be it her commitment to Philip or her desire to remove herself as cleanly as she can from her past, she’s yet to let herself relax around him since the two were first reunited after her time away, making things involving the pack just a bit more tense than they would have been otherwise. The two might be able to work together for the betterment of the pack, but in close quarters, Elena has made it clear that she doesn’t want anything to do with Clay and that the only reason she’s still there is to bring down those responsible for Peter’s death. But just because she’s rejecting the idea of reigniting her feelings for Clay doesn’t mean that she doesn’t care about him and on the next episode of Bitten, Elena finds herself defending Clay from murder accusations.

As she defends him from a possible death sentence, Elena becomes overwhelmed at the memories of their torrid romance, including the day that she was bitten at Stonehaven. For as many good memories as she might have of Clay and as much chemistry as the two still have, he made the decision to change her life without consulting her and he’s responsible for the self-hatred that eats away at her each and every day. Though his intentions in doing so were noble (in his mind), Clay is also the one who drove Elena away by biting her, causing her to reject the wolf life rather than embrace it with him like he expected. He thought that the two would be together forever once he turned her and that he finally found someone worthy of and capable of handling the bite, but instead, he chased away the one person who was able to understand him in the way no one else has.

Elsewhere on Bitten, Daniel Santos arrives at Stonehaven with information on the Mutt uprising.

Will defending Clay bring Elena closer to him? How will remembering the day she was bitten impact her relationship with Clay? Do you think the information Santos has will be of use to the pack?