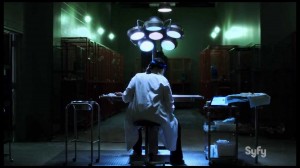 Syfy has announced that a marathon of the first five episodes of Arctic thriller Helix is set to air Thursday, February 6th beginning at 6:00. The series, which stars the likes of Billy Campbell, Hiroyuki Sanada, and Kyra Zagorsky, tells the story of a CDC team being called into a research facility when a viral outbreak has been detected and reported. However, once they arrive in the facility and assess the situation, they learn that the virus might be the last thing they need to worry about.

Listed below are the times, titles, and descriptions of the episodes in the Helix marathon.

6:00 p.m. – “Pilot” (First 15 minutes)
A team of scientists are thrust into a potentially life-or-death situation after being deployed to the Arctic to secretly investigate what could be a disease outbreak.

7:00 p.m. – “Vector”
Dr. Alan Farragut and his team work to treat the outbreak patients and contain the virus, while at the same time a rebellion erupts at the Arctic Biosystems base.

8:00 p.m. – “274”
The team have every hope that the virus is contained, but unfortunately it continues to spread at an alarming rate; at the same time, some of the secrets the docs are keeping prove to be deadly.

9:00 p.m. – “Single Strand” (Sneak Peek)
Alan and the team deal with secrets and suspicion as the crisis heightens and deadly consequences follow. Meanwhile, Walker tries to survive on Level R.

10:00 p.m. – “The White Room” (Sneak Peek)
Members of the CDC team come to the realization that nobody is who they seem to be at the base.

Helix airs Fridays at 10:00 on Syfy. You can check out a sneak peek of the next episode here.

Will you be catching up on Helix during the marathon? If you’ve watched every episode thus far, what have you thought about the show? Where do you think Helix will go in terms of story for the remainder of its season?