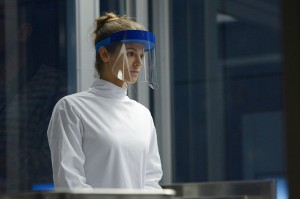 Syfy has released the cold open for tonight’s episode of Helix and in it, we see that Alan and Julia are both in precarious situations now that it’s been discovered that Sarah’s rapid-response test wasn’t entirely accurate. Alan has taken to Hatake’s office to make him aware of the situation they’re facing, that those in Level R only have the supplies necessary to survive for one week; if they’re unable to get the communication system back online and the satellite rebuilt by that time frame’s conclusion, they could be in for a world of hurt as far as morale and the condition of those deemed infected. However, even though there’s a chance that even more bodies could begin piling up, Hatake and Daniel both seem unbothered by the potential blood on their hands.

Meanwhile, Julia is in the middle of a brewing storm in Level R, as those sealed off have riled themselves up over the perceived injustices they’ve been subjected to from both the CDC and Hatake. When she suggests that maybe the growing plan to cut off the oxygen to those above them isn’t the smartest thing to do right now, the doctor gets thrown out of the relative safety of the infected sleeping quarters and into the hallway, where one dead body lays and another mysterious figure lingers. Unless Alan can get Hatake to agree to reopen Level R, Julia is going to spend the next six days on her own, six days without food, shelter, or her peace of mind, as she may or may not have already started hallucinating. Will Alan get to Julia before things get too bad in and around Level R?

Why do you think Hatake and Daniel are so blasé over the downed communication system? How will Julia be able to survive Level R now that she’s been thrown out of the sleeping quarters? How deeply entrenched is Balleseros in whatever conspiracy has pervaded the research facility?