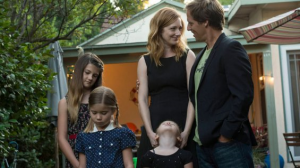 According to The Hollywood Reporter, FX has picked up two new comedies for this coming summer.

Created by Andrew Gurland (The Virginity Hit), Married stars Nat Faxon (Ben & Kate) and Judy Greer (Archer) as married couple Russ and Lina Bowman, who get along fantastically and seem to have a strong, aspirational relationship. Except for the fact that, due to their disconnection in the bedroom, Lina has given Russ permission to get a mistress as a way of saving their marriage. In addition to Faxon and Greer, the series will star Jenny Slate (Parks and Recreation) and Brett Gelman (Go On). Meanwhile, You’re the Worst, from Stephen Falk (Orange is the New Black), follows two self-destructive people attempting a relationship and the chaos that results. The series will star Chris Geere (The Spa), Aya Cash (The Wolf of Wall Street), Kether Donohue (The Carrie Diaries) and Desmin Borges (The Good Wife).

“Married and You’re the Worst represent the continuing expansion of our comedy brand. They are smart, funny and adult. Married is a frank and honest portrayal of a marriage — both good and bad. You’re the Worst examines relationships — or lack thereof — of millennials and the uncertainty and anxiety that comes with those relationships. There is tremendous talent behind these shows and we couldn’t happier about the quality of these pilots,” FX original programming president Nick Grad said.

The shows will be subbing in for usual FX summer entries Wilfred, which will have its fourth and final season this year on FXX, and Louie, set to air this coming spring following a lengthy hiatus. They’ll be the second and third new comedies of the year for the network, which has already debuted animated comedy Chozen, a project that was originally slated to air on FXX.

Do Married and You’re the Worst sound like shows you would watch? Will they find an audience on FX? What type of comedies would you like to see FX develop in the future?