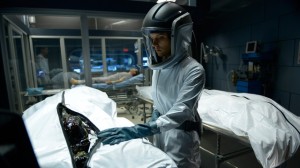 Syfy has released the first 15 minutes of Helix a week ahead of its upcoming series premiere. From Battlestar Galactica‘s Ronald D. Moore, Contact‘s Lynda Obst, newcomer Cameron Porsandeh, and Lost‘s Steven Maeda, the latter of which set to act as showrunner, the series tells the story of a team of CDC scientists called to a high-tech research facility in the Arctic to investigate a possible viral outbreak. While there, they soon realize that the disease is the least of their problems and that their main objective now is making it out of the facility alive – and with their sanity.

The double episode series premiere of Helix, set to air with limited commercial interruption, is set to air Friday, January 10th at 10:00 on Syfy. You can check out several trailers for the series here.

Will you be watching Helix? Do you like it when networks offer a sizeable chunk of the pilot ahead of time rather than the full pilot itself? How do you think a show like this can sustain such a potentially limiting premise?