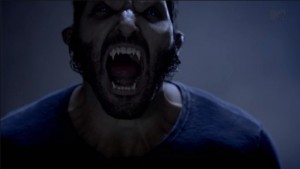 MTV has announced that a six-episode Teen Wolf marathon will precede the premiere of part two of season three. On Monday, January 6th at 4:00 p.m., the closing episodes of season 3A are set to air with limited commercial interruption leading into the 3B premiere at 10:00. At 11:00, new interactive talk show Wolf Watch, to be hosted by cast member Jill Wagner, will make its series premiere; the series is said to feature appearances from both cast members and celebrity super fans, who will dissect the episode that just aired and delve into the show’s mythology, humor, and romances. The first guests on the show will be Tyler Posey and Dylan O’Brien.

Listed below are the times, titles, and descriptions of the episodes in the Teen Wolf marathon.

6:00 p.m. – “The Girl Who Knew Too Much”
Allison becomes suspicious of someone close to her.

7:00 p.m. – “The Overlooked”
Scott and Derek get trapped inside an evacuated hospital during a powerful storm.

You can check out a trailer for season 3B of Teen Wolf here. The first half of the show’s third season ended up as its most watched to date, averaging 2.5 P12-34 and 2.8 million total viewers each week.

Will you be watching any of the Teen Wolf marathon to refresh yourself on the show’s increasingly complex mythology? Do you think that a Teen Wolf after show will end up being a fun way to unwind after each episode? What do you hope to see happen during the second half of the show’s third season?