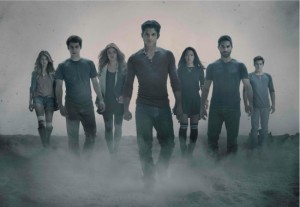 MTV has announced that Teen Wolf has been renewed for a 20-episode fifth season, up from the current 12-episode fourth season and down from the supersized 24-episode third season. Season five of Teen Wolf is set to air in two 10-episode installments, with the first half possibly to premiere in early 2015.

Thus far in its fourth season, Teen Wolf has been averaging around 1.7 million viewers, keeping it as the cornerstone of the MTV scripted programming boom that it began. Though the network took a while to gain its footing after the surprise success of Teen Wolf and Awkward, resulting in a string of one-season wonders and doubts about whether scripted content could be viable on MTV, there’s been some forward movement with the success of faux lesbian comedy Faking It and kidnapping drama Finding Carter. Next in line for MTV are comedy Happyland, which takes place at an amusement park, stars Bianca Santos (The Fosters), and premieres this fall; and Shannara, a straight-to-series adaptation of the fantasy novel series by Terry Brooks.

You can check out the Teen Wolf season 5 trailer on the MTV app via iPhone, iPad, or Android.

Will you be watching the fifth season of Teen Wolf? How do you think the show has adapted to the series of departures that predated season four? Where would you like the show to go during the upcoming fifth season?