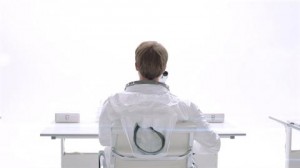 Syfy has released a series of new trailers for upcoming claustrophobic drama Helix ahead of its debut next month. Included in the latest batch of promotional material is an overview of the series, brief glimpses at the main characters that will be included, and a video that highlights the amount of secrecy that takes place inside the show’s claustrophobic setting.

From Battlestar Galactica‘s Ronald Moore, Contact‘s Lynda Obst, newcomer Cameron Porsandeh, Lost‘s Steven Maeda, the latter of which handling showrunner duties, Helix follows a CDC team that answers a distress signal from an Arctic research facility. A viral outbreak has occurred and while the team is tasked with containing it, they soon realize that they’re in for more than they expected, as the virus turns its victims into terrifying sub-human creatures and there’s more to the outbreak itself than they were informed of before arriving at the base. Can the team find a way to stay alive and eventually contain the virus within the base so that it doesn’t escape into society and potentially cause worldwide devastation? Or is the virus going to be too much for them to handle and become the root of their destruction?

The series premiere of Helix is set to air Friday, January 10th at 10:00 on Syfy with limited commercial interruption. A second episode will follow at 11:00 for the first week only.

Will you be watching Helix? Do the new trailers make you more likely to give the show a chance? Can it make find a foothold on Fridays following Smackdown?