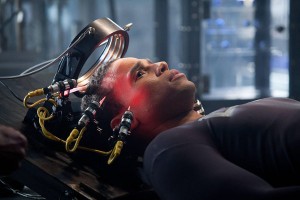 FOX has released the first eight minutes of upcoming sci-fi crime drama Almost Human, which takes place in the year 2048 and follows John Kennex (Karl Urban), a cop recently awakened from a 17-month coma that was the result of a brutal attack. The biggest change since he went into the coma? He lost one of his legs and has to be outfitted with a systemic appendage. Couple that with depression, mental atrophy, OCD, PTSD, and psychological rejection of the new limb and John might be wishing that he never woke up in the first place.

He gets a new lease, though, when he’s introduced to Dorian (Michael Ealy), a discontinued android with emotional problems. Every cop must partner with a robot and while John may be uncomfortable with the idea, he finds that he relates to Dorian since they’re both “flawed” half-man, half-machine at this point. The series, created by Fringe‘s J.H. Wyman and produced by J.J. Abrams, is said to focus on both the weekly missions of John and Dorian as they team together to fight crime and the mystery of the attack on John that left his then-partner dead.

The series premiere of Almost Human is set to air Sunday, November 17th at 8:00 on FOX, with another episode airing at its regular time the following day.

Will you be watching Almost Human? What do you think about the first eight minutes of the series premiere? Is the show going to pair well with Sleepy Hollow?