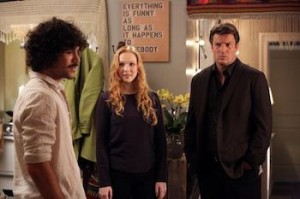 “Secrets, Murder and Gambling. Three of my favorite past times.” We didn’t get any gambling, but we sure did get a lot of secrets and one heck of a murder. Monday night’s episode of Castle, “Get a Clue” was a thrilling and pretty emotional episode.

The episode started off with Castle and Martha going over to Alexis and Pi’s apartment for dinner. I was impressed, it was actually a cute place. Castle was obviously not please about the situation and it showed. Martha was her charming, positive self. I really love that about Martha. Castle’s negativity was making Alexis uncomfortable and I didn’t blame her. Molly Quinn played it perfectly. Castle was hoping this thing with Pi would blow over, but it hasn’t. I think Castle just has to roll with it. He has to know, the more he pushes Alexis, the more she’s going to gravitate towards Pi.

So, the case this week had many crazy theories, sword fighting and millions of dollars worth of half dimes. To be honest, I enjoyed “Get a Clue”, but it wasn’t one of my favourites this season. It did have some really good moments. I laughed at Beckett when she was making crazy theories. She’s usually the voice of reason so it freaked Castle out since crazy theories is his department. I had to shake my head at Beckett when she said she couldn’t believe Castle actually believed the crazy theory in that letter by the Freemason, Theodore Rose. Does Kate know Castle at all? I always love how passionate Castle gets about the cases, especially the really wacky ones but this time it felt like Castle was going a little over the top. I was a little bit surprised Esposito agreed with Castle on that Da Vinci Code theory. I do have to say, it was a good theory.

I’m sure I’m not the only one who loved the sword fighting scene with Castle and that actor. It brought me back to the early Castle days when Castle had that fencing duel with Alexis in episode S1Ep7. I really do love the callbacks to earlier episodes. Makes me feel all nostalgic. So, the actor guy who was having the fight with Castle said that this whole thing was all part of a scavenger hunt. Well NOW things are starting to make sense. I was kind of wishing that the whole Da Vinci Code thing was for real. Of course, it was just a game. But wait, even though the letter was part of the game, thanks to Castle’s determination we found out this case wasn’t just about a game like we thought. Another part of the episode I really enjoyed was Castle putting his hand in the mouth and screaming like a mad man. It reminded me of that scene in the movie “Only You” or if you want to go really back, “Roman Holiday.” I always admire Beckett for keeping such a level head on these crazy cases. You have to have a balance since Castle is usually the wacky one out of the two.

Holy National Treasure Batman! In the coffin, there was the 1792 half dimes, the very first coins to be minted by the U.S. Treasury. Of course, taking it caused the door to be shut and Castle and Beckett locked inside the secret room. Why wouldn’t it? Later, we found out Nolan Burns the director of the Historical Institute set up the whole game for the sole purpose of getting his hands on the coins. It turns out Susannah our victim was a direct descendant of Theodore Rose. The killer was Susannah’s cousin Henry. I didn’t see that coming. Henry was the one that signed up for the game with an assumed name. Susannah wanted to give away the coins to the people but of course Henry couldn’t have that. They were arguing and the next thing you knew, Henry killed her.

I’m not sure about anyone else, but I got quite emotional watching the ending with Alexis and Castle. Alexis was so upset with Castle, and I have to say I didn’t blame her one bit. Castle apologized, but it wasn’t enough for Alexis because she knows it’s just words. Alexis was still really mad about how she found out Castle proposed to Kate. Turns out she didn’t hear the news from Castle, but from Martha over the phone. I have to say, that’s a pretty hard pill to swallow. Considering how close Alexis and Castle have been over the years, that’s unacceptable. I’m not sure if anyone else has a twinge of pain when Alexis said to Castle referring to Kate, “I don’t know if it’s a good idea, or if she’s really the one.” I don’t know if Alexis said that to Castle because she was hurt, or if it’s something she really feels. Maybe Kate and Alexis need to have a heart to heart one of these episodes. I hope Alexis doesn’t feel that Castle would ever replace her with Kate. I do have to say, this episode I was impressed with Molly Quinn. She really held her own with Nathan. Nathan wasn’t too shabby either. You really did see the hurt in his eyes when he was talking to Alexis. Castle really has his work cut out for him. I just hope he comes around about Pi, for Alexis’ sake. They have one of the best father daughter relationships on television and I don’t want to see that strained because of a disagreement about a guy.

“Get a Clue” soundbites:

“It’s as though he’s turned being a charming man child into a career.” – Castle

“Now that doesn’t sound familiar does it?” – Beckett

“They sent their monk assassin to kill her.” – Castle

“There are times where I wish she stayed in D.C.” – Ryan

“These monks, they’re in it, up to their hoods.” – Castle

“This is not my idea of going to the chapel with you.” – Castle

So, what did you guys think of tonight’s episode? Do you think Castle and Alexis’ relationship will get worse before it gets better? Sound off below.