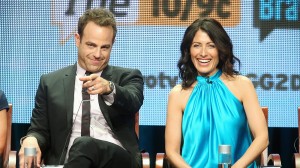 Bravo has announced that scripted series Girlfriends’ Guide to Divorce will be premiering Tuesday, December 2nd at 10:00. The series will be Bravo’s maiden voyage into original scripted content and could theoretically open the reality-heavy network up for more scripted series in the future, assuming it finds success in a potentially tricky time slot.

Based on the novel series by Vicki Iovine and adapted for television by Marti Noxon (Buffy the Vampire Slayer), Girlfriends’ Guide to Divorce tells the story of self-help author Abby (Lisa Edelstein), who has built an empire on her takes on family and married life. However, everything she worked so hard for is threatened when she inadvertently reveals that she’s separated from her husband (Paul Adelstein) and finds herself forced to navigate the Los Angeles singles scene as a 40-something divorcee. Rather than seeking out advice from her married friends, Abby turns to her divorced friends Phoebe and Lyla, all the while dealing with her divorce proceedings and her husband’s decision to hire a rival attorney at Lyla’s firm (Necar Zadegan) to represent him.

You can check out the official trailer for Girlfriends’ Guide to Divorce below.

Will you be watching Girlfriends’ Guide to Divorce? Do you think that the series will open Bravo up for more scripted content? What type of scripted series would you like to see Bravo go after next?