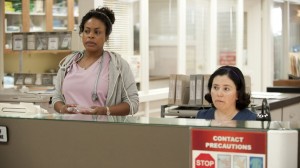 HBO has released the trailer for the upcoming second season of medical comedy Getting On. Among the issues addressed in the clip are DiDi’s attitude, cleanliness around the ward, and Dawn’s increasingly complicated relationship with Patsy, who she refuses to get over or let out of her grasp.

Based on the British series of the same name and adapted for American television by Mark V. Olsen and Will Scheffer (Big Love), Getting On follows the doctors and nurses at a Long Beach extended care facility. Not only must they acclimate themselves to an environment that is a constant reminder of their own mortality, but they must try to make the most with what little resources they have, as the unit is understaffed and filled with archaic medical equipment that serves no purpose other than taking up space. The series stars three-time Emmy winner Laurie Metcalf (Roseanne), Alex Borstein (Family Guy), Niecy Nash (The Soul Man), and Mel Rodriguez (Enlisted).

The second season of Getting On is slated to premiere Sunday, November 9th at 10:30 on HBO, where it will follow the final season premiere of The Newsroom and the return of The Comeback.

Will you be watching the second season of Getting On? How do you think Dawn’s relationship with Patsy will develop throughout the course of season two? Is Jenna going to accept her position at the hospital after what happened with her most recent job opportunity?