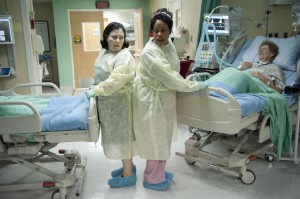 Variety is reporting that HBO has officially renewed offbeat medical comedy Getting On for a second six-episode season. The series, a modest performer in the ratings when it premiered this past November, was well-received by critics and garnered enough positive word-of-mouth to earn itself the renewal, which was contingent on budgetary negotiations going through.

There”s no word yet on when Getting On will premiere its second season, though with True Blood and Boardwalk Empire both possibly having abbreviated final seasons, there”s a chance that we”ll be seeing Getting On come late fall once again. Getting On being renewed is the latest in a string of moves made by HBO, which included the cancellation of Hello Ladies and Family Tree and the pickup of comedies The Brink and Ballers. The network is trying to broaden its comedic audience, atoledo as its comedies tend to bring in low live ratings that are offset by critical love, and will look to continue doing so when its next original comedy, Mike Judge”s Silicon Valley, premieres this coming spring.

Aside from getting a boost from critics and its own creative direction, Getting On was helped by the state of HBO at the moment, as Boardwalk Empire, True Blood, The Newsroom, and Treme will all end within a one-year time period. Couple that with the previously mentioned comedy turnover and there”s a lot of room up for grabs at HBO, so they knew they could afford something smaller, quieter, and more left of center with all the big swings that are yet to come. The network has yet to renew its two newest series in crime drama True Detective and gay-themed dramedy Looking, though polarizing comedy Girls received a fourth season order last month at the Television Critics Association press tour.

Are you happy that Getting On was renewed for another season? Would you like to see the show put it another time of the year, one that could garner it more recognition and sampling? What do you think will happen during the show”s second season?