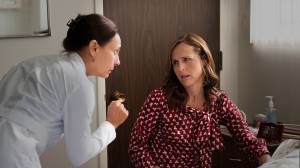 Working in geriatrics is difficult for everyone on Getting On. No matter the staff’s levels of experience or empathy, investing in people only to watch them either fade away or suffer can weigh heavily, making that type of ward only for the faint of heart and steel of nerve. But geriatrics isn’t just hard on those who have to interact with every patient; they’re also hard on those whose loved ones are staying on the ward, especially patients whose health has left them a bit unstable. Already on pins and needles waiting for news, the slightest change in health can either give them hope for the future – or crush any possibility of a future at all.

On the season finale of Getting On, Phyllis gets the runaround regarding her mother’s situation, which has begun vacillating between better and worse, depending on when you ask the staff at Billy Barnes. Although she doesn’t want to have to say goodbye to her mother, Phyllis needs to have concrete word about her condition in order to begin the grieving process and allow herself to let go of the possibility of her getting better. Now, though, she’s stuck in some kind of strange health care limbo, where she feels everything and nothing about where her mother is at and what’s going on; she can’t let herself get down due to the chance of her mother pulling out of this, but if she lets herself get too hopeful, she might be setting herself up for bigger disappointment when things don’t work out the way she wants them.

Elsewhere on Getting On, Jenna tries to leverage concessions from Dr. Stickley, while an equipment malfunction injures a patient and staff perform their annual concert for the ward.

The season finale of Getting On is set to air Sunday at 10:00 on HBO.

Is Phyllis’ mother going to make it through the season finale of Getting On? Will Jenna decide to stay at Billy Barnes? How will Dawn and Patsy be around one another after what happened during the most recent episode?