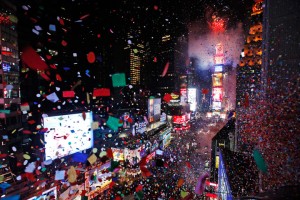 Like every year, New York City is all set for the Times Square Ball Drop to welcome the brand new year of 2014. Well, this year the honors will be done by the Supreme Court Justice who will be leading the countdown of the final 60 seconds and then trigger the signal to drop the New Year’s Eve ball at the advent of the year 2014.

This tradition in the New York City is very popular in the whole world and as always will be covered by all networks such as NBC, ABC, Fox and CNN. And this year, the countdown shall be monitored by the Chief Justice of Supreme Court of the United States of America, Justice Sonia Sotomayor. The native of the Bronx, Sonia was appointed in the U.S. court back in the year 2009.

The biggest event of New York City will take place tomorrow where numerous people of NYC will welcome the new year at the ball drop by Justice Sonia Sotomayor. The humongous New Year’s eve ball at the Times Square is known to have imbibed around 2600 crystal triangles and lights up with the help of more than over 32,000 lights, which are lit from within.