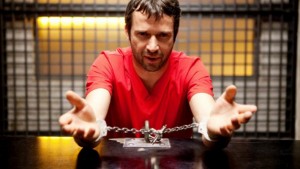 FOX has revealed several changes to its already announced midseason schedule, leading off with the second season premiere of The Following airing Sunday, January 19th at 10:00 following the NFC Championship game. Previously, the network had penciled in the series premiere of Greg Kinnear law dramedy Rake there, but since The Following looks to be more male-friendly than Rake, FOX decided to make a move, which allows The Following to air on two consecutive nights. Rake will now premiere Thursday, January 23rd at 9:00, its regular time slot.

The biggest changes come for the network’s Tuesday nights, as The Mindy Project and Dads will be put on hiatus beginning January 28th and February 11th, respectively. On February 4th, Brooklyn Nine-Nine moves to 9:30 to air behind New Girl, where it will stay until its late March finale. Mindy will then return to its slot on April 1st and finish out the season there, with Glee moving to the night on February 25th at 8:00. There’s been no return date set for Dads as of yet.

All the moves that FOX made today carry a certain amount of sense to them – Glee was floundering on Thursdays and has a guaranteed sixth season, so it needed to be moved and could prove to be a good match for New Girl; The Following is their biggest drama right now and giving it the NFL boost will not only help their affiliates, it’ll fight against a sophomore ratings slump; though the network brass love The Mindy Project, and it has a small but loyal fanbase, it hit a series low this past week and doesn’t seem to be benefitting from its time slot; despite its full season order, Dads has been an albatross around the neck of the network and this seems to be a way to guide it to cancellation without having to rescind the 22-episode order. However, the changes will just end up being confusing to the casual viewer with all the show shuffling and FOX has shown itself to be unsure of itself at this point in the season, making that abundantly clear by how quickly they offered a revised version of the schedule they unveiled earlier this fall.

With the annual winter TCA press sessions only a couple of months away, don’t be surprised if more moves are made, in addition to the scheduled announcements of premiere dates for 24, Gang Related, and Wayward Pines.

Do you think that FOX made the right changes to its midseason schedule? Will the moves help rejuvenate their Tuesday nights? Is there a chance that The Mindy Project doesn’t return for a third season?