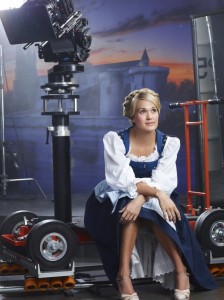 NBC has released the full trailer for the upcoming live production of The Sound of Music.

As opposed to the previous clip, the new spot features a longer look at the larger cast – not just Carrie Underwood – as they describe details of the production.  Though Underwood opens the promo, Audra McDonald,  Laura Benanti, Christian Borle and Stephen Moyer are all featured – with Benanti saying perhaps the most defining and important-to-note detail:

“We’re not trying to remake the movie.  Nobody can remake the movie,” Benanti asserts.  Of course, referencing the 1965 Oscar-nominated film adaptation starring Julie Andrews.  It has been said previously that this production is more-aptly compared to the original stage production of the story….if a comparision is even necessary.

Castmembers note the scope of the production (“The set was a NASA hanger,” says Borle), as well as make sure to compliment each other – the incredible talent the Sound of Music production will be featuring.

Surely, as Benanti says, the NBC production will be “a Sound of Music for a new generation.”

Watch the full trailer below:

The Sound of Music airs live on NBC December 5th.