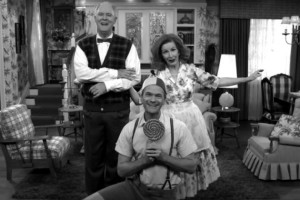 This week’s HIMYM was definitely a highlight of the season for me.  As suspected, this season has been slowly adding to more of the emotional depth of the characters – and this week’s “Mom and Dad” episode featured Barney’s inner-child.  And I don’t mean “inner-child” referring to his maturity…

…I mean the little boy who wants his Mom and Dad back together.

John Lithgow returned to the show to reprise his role as Barney’s father Jerry, who since leaving him behind as a kid has married and had more children.   Jerry hasn’t even seen Loretta in years – but that doesn’t stop Barney from jumping to conclusions and excitement as he does, and believing that his parents have somehow re-discovered their love for earch other.  Barney then goes all out trying to set his parents up again, sending Jerry’s wife away with Ranjeet, trapping the two in an elevator and sending down wine and candles, and the smooth jazz arangement of “Bang Bang Bangity Bang.”

But Barney’s not the only son playing matchmaker.  Sam (Ben Vereen), James’s father has also arrived in Farhampton.  In part to stand in to perform Barney and Robin’s ceremony…but also because he’s getting back together with Loretta.  James could not be happier, but Barney has to face the fact that his parents getting back together just isn’t going to happen.

Daphne, a pleasant addition to the show for this run of episodes, also saw some traction, as Marshall made sure she made it to her daughter’s school on time.  After getting completely fed up with The Proclaimers and their road tirp in general, Daphne broke down, spurring Marshall – who we all know is one of the nicest guys in the world – to go out of the way to get her to her daughter.  This was a great change to see; not only did Marshall realize that Daphne had been telling the truth the whole time, but Daphne also finally softened.  However, it seems that this marks the end of Daphne on HIMYM.

Elsewhere in the episode, Ted and Lily dealt with William Zabka attempting to undermine Ted as best man by fake-ruining a gift from Barney to Robin.  Detective Mosby arrived on the case, and ultimately ended up lying to give Zabka a chance to be the good guy (instead of the villian he so often portrays).

Overall, this was a great episode.  While nothing was necessarily earth-shattering in terms of the overall plot, it was great to see the true childlike dream of Barney’s.  And of course, there were great highlights: the aforementioned arrangement of “Bang Bang Bangity Bang,” the fantastic 1950s Stinson family musical bit, but most importantly, the Pineapple incident.

Yes, upon Ted beginning his investigation Lily revealed the case from “8 years ago you still haven’t cracked.”  Cut to a murder board-like situation of Ted investigating the mysterious Pineapple…and failing.

Personally, I can’t wait to see what happens in Farhampton after Marshall finally arrives with Marvin.

What did you think of “Mom and Dad”?  And don’t forget to go wish How I Met Your Mother a congratulations on their 200th episode!