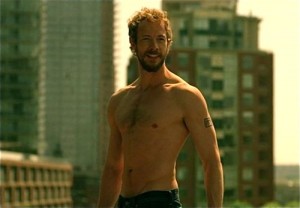 Syfy has revealed 2014 premiere dates for its slate of returning favorites and upcoming debuts.

Monday, January 13th will see the fourth season of Lost Girl premiere at 8:00, a time change following three seasons of airing at 10:00. The network used the Mondays at 8:00 slot last year for the first season of Continuum before moving it to Fridays for season two. This season on Lost Girl, Bo’s return blurs the lines between the Dark and the Light and causes her and her friends to band together in a time of crisis. 9:00 finds the fourth season of Being Human premiering, complete with a four month time jump. As Aidan and Nora attempt to save Josh from his wolf form, Sally does battle with Donna and must fight her way out of her death spot. Finally, Mondays at 10:00 will house werewolf drama Bitten. Starring Laura Vandervoort, the thriller centers on the lone female werewolf in existence returning to the werewolves’ ancestral domain when she learns that her Pack is being targeted by a mysterious threat.

New Tuesdays begin on January 14th at 9:00 with the season premiere of Face Off, introducing 14 new makeup artists to the extreme challenges that will push them to their artistic limits. The following week at 10:00, Opposite Worlds debuts. Running for six weeks and 12 episodes, the live social experiment takes 14 people from all walks of life and puts them into a house with two distinctly different worlds: one past and one future, both with their distinct advantages and disadvantages. Each week, following a series of challenges, viewers will be able to watch and impact the fate of the players in the game.

Ghost Hunters is set to return for a string of new episodes on Wednesday, January 22nd at 9:00, including trips to Gettysburg, Buffalo and Erie County’s Naval & Military Park, Historic Jordan Springs in Winchester, Virginia, and Belle Grove Plantation in King George, Virginia.

What will you be watching on Syfy this winter? Do you like how they handled their Mondays? Where would you like to see the Ghost Hunters visit that they haven’t already?