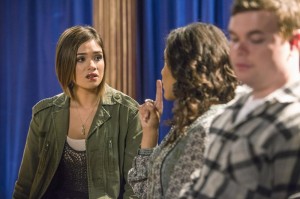 In general, crossing over to the other side on a television show or movie is meant to signify the end of a journey, the completion of unfinished business and the final rest that a restless soul has earned. No longer will the spirit feel lost or alone, as they’ve entered into the next phase of existence and will be content from here to eternity. Miranda looked to have just that when she found the spirit of her mother in the middle of a high school auditorium and followed her out a door with nothing but white light on the other side; by accepting her mother’s invitation, she fulfilled her reason for coming to Ravenswood in the first place and can now spend as much time as she could possibly want getting to know her and making up for the years that they were apart. But is she in a type of danger that she doesn’t even realize yet?

On the midseason finale of Ravenswood, Miranda is in what looks like her ideal version of the afterlife – she’s with her mother and father in her old room and the two are being extra attentive/loving toward her, the type of positive attention she hasn’t received from a parental figure in a long time. However, there’s also a little mute girl named Max, who popped up in the yard one day, has lived with the family ever since, and can spin her head around 180 degrees. Obviously, this isn’t the cute, kind little spirit that she seems to be at first glance, instead a harbinger of the danger that Miranda currently faces and a possible indicator that whoever (or whatever) appeared before her at play practice was not her mother after all. Though the group is struggling to put the pieces together regarding the pact and how they fit into the historical curse that surrounds Ravenswood, can Caleb’s instinct that Miranda isn’t in a good place help them retrieve her from wherever she is before it’s too late?

Elsewhere on Ravenswood, Caleb hits a dead end in his search for answers, while Remy uncovers a major clue, Luke tries to get on the same page as the rest of the group, and Olivia strives to reconnect with Dillon.

The midseason finale of Ravenswood is set to air Tuesday at 8:00 on ABC Family. The show will return Tuesday, January 7th at 9:00 following the season premiere of Pretty Little Liars.

What type of danger do you think Max poses to Miranda? Can Luke get on the same page as Remy regarding the recent string of paranormal events? How close will the group come to figuring out what’s haunting Ravenswood?