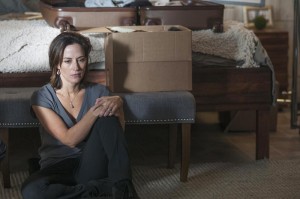 Eventually, the truth about Sara and Jack’s affair was going to come out. Neither one of them was especially good at covering their tracks with their significant other and how lovestruck they both are prevented them from thinking clearly ever since the beginning of their relationship. On some level, Jack wanted to be found out so that he could be punished for making yet another wrong choice in a life seemingly filled with them, while Sara’s newfound sense of self-confidence and inspiration clouded any chance she could have had of planning for the day that things would blow up in her face. Regardless of what kept them from sealing their affair in the bubble that it was in during recent weeks and months, the fact remains that now both Sara and Jack have to face their newly minted family dynamics.

On tonight’s episode of Betrayal, Jack discovers just how disconnected he’s become from his family when it comes Victor and Valerie’s birthday and Sara struggles with how to live a life that might not include seeing Oliver off to school every day. As they watch their families crumble around them, they both have a decision to make, a decision that they never thought they would be faced with – do they think that their current relationship is worth saving? The more likely of the two to attempt a reconciliation looks to be Jack, as his more conservative upbringing and approach to life could play into the sense of responsibility he has toward Elaine after two decades together; however, she’s not exactly wanting to be around him right now, not when, in her estimation, she hasn’t punished him enough for hurting her the way he did.

The sense of purpose and passion that Sara found in Jack might inspire her to want to give things with him a serious shot, seeing as she’s been grasping at straws trying to justify such a decision. However, with Drew seemingly ready to give things another go, she has an easier path to the life that she thought she wanted all those years ago. The handsome bread-winning husband, the perfect child, the career path that leaves her feeling fulfilled – it’s all there for the taking, but is this the man she wants to spend her life with? And is there a chance in the world that he won’t use the affair as a weapon in their next verbal tussle, should Sara decide to get back with him?

Elsewhere on Betrayal, unable to cope with what happened to Brandy, TJ becomes reckless, while Karsten is forced to confront his past and take drastic measures in the present.

Will Jack be able to reconnect with Valerie and Victor, a possible first step toward getting back together with Elaine? Should Drew allow Sara to continue living in their apartment for Oliver’s sake? Just how reckless will TJ Karsten become once he learns of the great loss he suffered?