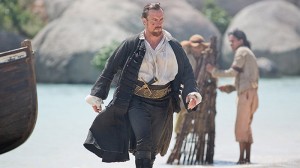 The eight-episode first season of pirate drama Black Sails is set to set sail Saturday, January 25th at 9:00 on Starz, the network announced today. Executive produced by Michael Bay, the series takes place twenty years prior to the events of Robert Louis Stevenson’s Treasure Island and will follow Captain Flint (Toby Stephen) as he takes aboard a new addition to his crew in the form of John Silver (Luke Arnold). He’ll need all the help he can get to hang on to prized New Providence Island, the most notorious criminal haven of its day and a place where a pirate can be a pirate; the id-friendly locale has come under siege and is in danger of losing what makes it special to the crew of pirates that currently occupy it.

Most interesting about the premiere date release is that the network is opting to keep original programming on Saturdays, not exactly known for its hospitality to scripted originals. But after the success of The White Queen earlier this year, as well as the difficulty in getting a foothold on Fridays (i.e. the two-and-outs of Boss and Magic City), Starz decided to go another way in hopes of making a play for scripted success in 2014. It remains to be seen if other originals in the pipeline for this year, including the second season of Da Vinci’s Demons and literary adaptation Outlander, will be airing on Saturdays, however.

Black Sails was renewed for a 10-episode second season this past summer. You can check out a trailer for the series here, as well as the show’s panel at New York Comic-Con here.

Will you be watching Black Sails? Do you think that Flint and his men can hang on to New Providence Island? What could ultimately lead to Flint’s undoing in the reckless, increasingly violent pirate world?