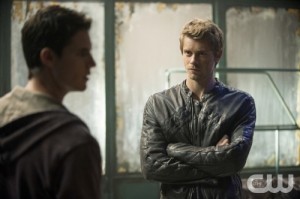 Although Stephen has done what he’s thought was right for both himself and the Tomorrow People since he first learned about his powers, that’s often ran in opposition to the established way of life that John had implemented since he rose to power. It’s not that either man is inherently right or wrong about the way they view their species; they just continually clash, which has led to a certain amount of instability within the Tomorrow People ranks. Stephen may have the best of intentions, but in voicing his opinion as often as he does and continuing to act as an alternative to John, he’s weakened his people and become something of a liability to them. Is there a way he can make up for the rocky road his time as a Tomorrow Person has gotten off to?

On the next episode of The Tomorrow People, Stephen has began using his powers above ground and, worse, for non-vital situations, causing Jedikiah to have to reign him in with a bracelet that saps his nephew’s powers. It’s not a great time for Stephen to come out of line, as there’s a new breakout around and he wants to help bring him in on his own, something that doesn’t exactly seem like a good idea since he’s not mastered the skills that Ultra has taught him and the two partners he’s been assigned were killed in the line of duty. So Stephen is now on Ultra’s leash even more than he had been and he doesn’t have his powers to help the Tomorrow People with the breakout, making his ideas of reformation a lot less sexy due to the lack of action behind the words. It’s one thing for someone who could be the most powerful member in their community evoking a change of course, but if Stephen can’t lead them through his actions, he’s useless, in their eyes.

Elsewhere on The Tomorrow People, John senses a strange tension between himself and Cara once he returns from Oregon with Russell, while Stephen has a moment of clarity when it comes to his father that makes him more determined than ever to find out what happened to him.

Do you think that Stephen can handle a new breakout on his own? Will John figure out where the tension between himself and Cara is coming from? How close is Stephen to making a breakthrough in the search for information about his father?