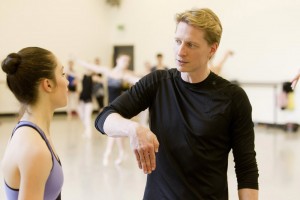 “The casting process of finding exceptional dancers to inhabit these roles has been incredibly creative and exciting,” said series creator and executive producer Clara Walley-Beckett. “The verisimilitude of the project is of paramount importance to me. I want to be able to capture dance on film with complete integrity, authenticity and freedom.  Not only are the dancers we’ve cast thus far brilliant company level artists, but they’re also thrilling, intuitive actors.  I’m inspired and optimistic about discovering the perfect ‘Claire.’”

From Walley-Beckett (Breaking Bad), Lawrence Bender (Good Will Hunting), Kevin Brown (Roswell), and John Melfi (Rome), Flesh and Bone follows Claire Robbins, a young ballet dancer with a difficult past who gets the opportunity of a lifetime when she joins a New York ballet company. However, the more she ingratiates herself into the world she thought she knew, the most she realizes that she never knew anything about it at all. Auditions are currently underway for her casting.

Flesh and Bone‘s development comes not long after fellow ballet drama Bunheads was cancelled after one season on ABC Family. However, the one of Flesh and Bone is supposed to be darker and grittier than the Amy Sherman-Palladino drama, whose small but dedicated audience wasn’t enough to save it from cancellation. If Flesh and Bone gets picked up to series, which is looking increasingly likely, it would be okay with having that type of audience, as premium cable thrives less on overall numbers and more on engagement.

Does Flesh and Bone sound like something you watch? How do you think a drama like this will look/feel on premium cable? Should the show be picked up, will it fit well alongside the other dramas on the network?