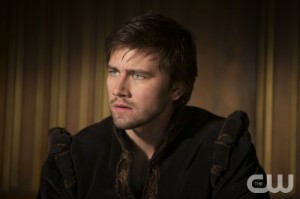 Just like that, Mary’s relationship with Francis took three giant steps back, as he allowed his hurt feelings at the kiss with Bash and desire for Olivia to guide him to put some distance between himself and his betrothed. While he did pledge to help her whenever Scotland needs something, Francis wants nothing to do with Mary in a romantic sense and any hope she might have had of securing a wedding date in the near future was immediately crushed. The two had been on decent terms before Olivia arrived at the castle, but between Francis’ old feelings resurfacing and Mary feeling increasingly shut out, her arrival was the harbinger of doom for their relationship.

On the next episode of Reign, Mary and Francis will have what remains of their relationship tested when the castle comes under siege and Francis is taken hostage. Times of great mental stress can often bond people together, especially when the thought of mortality comes into play, and both Mary and Francis could see their fondness for the other grow once the idea of never seeing them again presents itself. With the help of Catherine, Mary will attempt to get Francis physically back into her life and hope that their brief time apart can help him recant his earlier assertions of wanting to maintain personal distance. As much as Mary has connected with Bash and as cold as her time with Francis has left her, she’s too determined a person to let her fiancée slip away from her like that, not when she doesn’t know she can count on France’s support the next time Scotland’s border falls and not when she feels as if the romantic side of their relationship didn’t get a fair chance to develop. But what will happen when she finds out that he took to Olivia’s bed not long after ending things with her? Will this be the push that Mary needs to pursue her heart while at court?

Elsewhere on Reign, Diane tells Bash of her plan to have him legitimized.

Will the hostage situation bring Mary and Francis closer together? Why do you think that Catherine has inserted herself into the middle of the siege? Is Bash even going to want to be legitimized at this point?