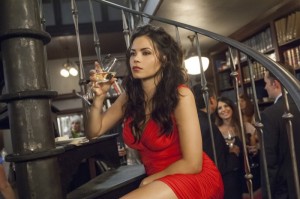 Lifetime has announced that supernatural drama Witches of East End has been renewed for a second 13-episode season, set to premiere sometime next year. One of the network’s youngest-skewing series ever, Witches is averaging 3.0 million Total Viewers, 1.7 million Adults 25-54 and Adults 18-49 viewers, and 1.3 million Women 18-49 and Women 25-54 viewers on a Live+7 basis through five weeks.

“With its great story telling and amazing cast, Witches of East End is leading a full-blown witch renaissance,” Rob Sharenow, executive vice president and general manager of Lifetime, said in a statement. “The show’s perfect mix of premium execution with content that is in the zeitgeist is drawing new viewers to Lifetime and we’re very excited to be bringing it back for a second season.”

Starring the likes of Julia Ormond, Rachel Boston, Madchen Amick, and Jenna Dewan Tatum, Witches of East End tells the story of the Beauchamps, a family of witches who must band together if they have any hope at defeating the shapeshifter who wants to bring them down. The series joins Drop Dead Diva in getting another season after airing in a tough fall time slot and becomes the second Lifetime freshman series to secure a renewal this year following the breakout success of Devious Maids. 2013 was a changing of the guard of sorts for Lifetime, as Army Wives, the longest-running scripted series in network history, and The Client List were cancelled in recent months, one made all the easier by the constant growth of Maids and the young skew of Witches. The show’s season finale is set to air Sunday, December 15th.

Witches of East End airs Sundays at 10:00 on Lifetime. You can check out a recap of the most recent episode here, as well as a preview of the next episode here.

What have you thought about Witches of East End this season? How do you think the season is going to conclude? Is there anything specific you’d like to see happen for season two?