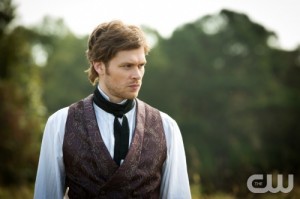 Despite all that the Original family has been through, Rebekah has remained loyal to and protective toward Elijah, both out of appreciation for who he is and the fact that he’s not the bloodthirsty tyrant that Klaus can be when he gets a whiff of power. Together, the two have (mostly) been able to reign their brother in and keep him from chasing every last impulse of his consciousness, but apart is when they’re most vulnerable, particularly when Elijah is elsewhere and Rebekah has to deal with Klaus on her own. It’s easier to be braver and more defiant toward her brother with Elijah there as back up; however, with him still in the bayou and sick from the bite, Rebekah has to tread very carefully around Klaus, lest she end up with a dagger in her heart for another century.

On the next episode of The Originals, Klaus threatens to do just that when Rebekah mentions how she doesn’t like the way that he treated Elijah. Already torn between Klaus and Marcel, she doesn’t know how to approach the precarious situation that she’s been put in and turns to Father Kieran for guidance, as he’s been entrenched in the city for years and can tell the way the wind is blowing regarding the conflicts within its borders. Without Elijah and Hayley, Kieran is the best option for someone for Rebekah to confide in, especially considering that he doesn’t have an allegiance with either Marcel or Klaus, but the human faction of New Orleans does have a presence in the city. Although she comes to home looking for advice, Rebekah may inadvertently give Kieran the ammunition needed for the humans to strike against the vampires or, at the very least, to stoke the fire between Klaus and Marcel in hopes of them both getting burned.

Elsewhere on The Originals, Marcel uncovers some upsetting information about Klaus, while Hayley gets drawn away from Elijah by a mysterious figure with knowledge of her past and Cami struggles to make sense of a cryptic message she received.

How will Rebekah deal with the position that Klaus put her in? What type of information do you think Marcel uncovers? Is Hayley going to learn something about her past from the mysterious figure?