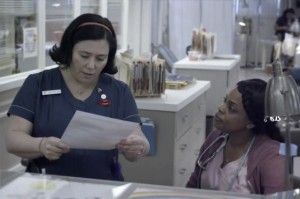 The Billy Barnes Extended Care Unit of Mt. Palms Hospital in Long Beach, California is forced to deal with the problems that no one else wants to or isn’t able to do. They’re the people who help the elderly find some sense of physical and emotional comfort in the various conditions afflicting them, all the while having to keep a positive attitude and never looking down on either a patient or a duty that is expected of them. To work in extended care, one has to have a tough stomach and a steely resolve while also possessing the sensitivity to deal with the tough issues they encounter on a daily basis, but just how tough are the current staff at Mt. Palms?

On the series premiere of Getting On, the staff finds that one of the chairs in the lounge has a feces sample on it. However, nobody knows where it came from, so the nursing staff, as well as a few select doctors, will have to look into the patients that they’ve saw that day and where the patients they already have were in the past few hours. If someone has something medically wrong with them that caused the sample to come out and contaminate the chair, they need to know so they can determine what the best course of action would be, while if it’s a psychological difficulty, they want to catch it before it becomes something overwhelming and so they can direct the patient to the proper channels. But what if it turns out that the sample came not from a patient but from one of the staff themselves?

Elsewhere on Getting On, the staff tries to determine the identity of a woman found wandering the highway, while there are mixed opinions over what to do with a deceased patient’s birthday cake and Dawn gets criticized for wearing inappropriate boots to her job.

The series premiere of Getting On is set to air Sunday, November 23rd at 10:00 on HBO.

Will you be watching Getting On? How do you think the feces got on the chair in the first place? What should the hospital do with the birthday cake for one of their former patients?