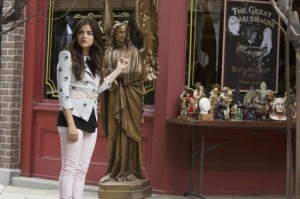 This week on TVHackr, we talked about Penny Dreadful casting, the 2013 Video Music Awards, and upcoming episodes of Siberia and Mistresses, while the internet touched on fall television, what to binge on during Labor Day weekend, and the use of music on television.

Penny Dreadful: Timothy Dalton Joins the Showtime Thriller
The James Bond actor has signed on to the psychosexual thriller, set to premiere in 2014, and will play an African explorer whose quest takes him to London.

Boardwalk Empire Season 4 Previews: The Only Thing You Can Count On is Blood
HBO has released several teasers for the fourth season of Boardwalk Empire spotlighting the locations central to the action and introducing a new character.

The White Queen Episode 3 Recap: God Has Spoken to Me of You
While Warwick”s quest to get George on the throne doesn”t go as expected, Margaret”s actions harm her husband”s career and Elizabeth uses her magic for revenge.

Looking: Scott Bakula Joins the Upcoming HBO Dramedy
The Men of a Certain Age alum has joined the upcoming HBO gay-themed dramedy as an entrepreneur and pillar of his San Francisco community.

The White Queen Marathon to Air Saturday, August 31st
Instead of a new episode this weekend, Starz will be marathoning the first three episodes of international limited series The White Queen.

Penny Dreadful: Reeve Carney to Play Dorian Gray
Stage actor Reeve Carney is the latest to join the Showtime drama, where he will be playing famed literary character Dorian Gray.

Mistresses 1.12 Preview: Savi and Dom Grow Closer
On the next episode of Mistresses, Savi begins accepting the fate of her marriage to Harry, while April looks for Lucy with Paul and Karen learns the verdict in her case.

Siberia 1.09 Preview: Who Has Taken Irene?
On the next episode of Siberia, a contestant comes back to camp with a horror story that alarms everyone else, while those at the research facility dig into the history of the Siberian wilderness.

Tyrant: Fares Fares Joins the FX Drama Pilot
The FX drama pilot from Homeland“s Howard Gordon and Gideon Raff has added the Zero Dark Thirty actor as a friend of the main character.

Ravenswood Trailer: I Wish You Were the One Who Got Away
Get a first look at Ravenswood, the upcoming spin-off of Pretty Little Liars that follows five strangers bound together by the curse that has been plaguing their town for generations.

Syfy Announces Fall 2013 Premiere Dates
Syfy has revealed when the next seasons of Haven, Ghost Mine, and Ghost Hunters will premiere, as well as when Naked Vegas and Fangasm will debut.

The Longest Wait-For-It Ever? NPH Previews HIMYM’s Final Season
In the CBS Fall Preview Special, Neil Patrick Harris previewed the final season of How I Met Your Mother, including the role that the mother, revealed in last season”s finale, will play in the narrative.

Kevin Spacey, Netflix, and Having Control
Emmy nominee Kevin Spacey recently gave a speech extolling the virtues of the Netflix model of distributing content and TVHackr analyzed what he had to say.

Devious Maids 1.11 Preview: Alejandro and Carmen Differ on His Relationship
On the next episode of Devious Maids, Carmen and Alejandro have a disagreement, while Marisol gets closer to the truth and Rosie cleans up a mess that Peri made.

So… what’s good?: 26 current TV series worth binge-watching this weekend (The A.V. Club)
Need something to watch this Labor Day weekend? The A.V. Club gives you a list of 26 series that you should be up-to-date on and if you”re not, you should catch up this weekend.

The 15 Best Comedy Central Roast Sets Ever (Vulture)
Ahead of the Labor Day roast of James Franco, Vulture lists the 15 greatest sets of the annual Comedy Central event.

Pop culture: which TV shows use music the best? (The Guardian)
Which shows on television utilize music in the best way? The Guardian gives several examples and provides clips to support its opinion.

Why Is the Golden Age of Television So Dark? (Bloomberg)
Bloomberg examines why the Golden Age has been such a dark time for television, in terms of main characters, themes, and motifs.

55 TV Shows to Watch This Fall (The Atlantic Wire)
Want a guide to any and everything happening this fall? The Atlantic Wire previews the expectedly chaotic beginning of the television season with previews of 55 possible shows to watch.