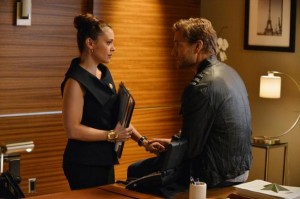 After several episodes of bending over backwards to think of ways to bring Harry back into her life, Savi all but threw in the towel on last night’s episode of Mistresses, resolving herself to the idea of them not getting back together. He’s not been receptive to working things out, especially since he doesn’t know whether or not Savi’s baby is his, and there’s only so much she can do to convince him that they should be giving their marriage another chance. As a result of being alone for the first time in years, alone in a giant house with the timer ticking down until she becomes a single mother, Savi begins thinking about giving into temptation on the next episode of Mistresses.

Her encounter with Dom wasn’t just a spur-of-the-moment physical thing between two people who finally gave in to their sexual chemistry; it was based in feelings that she had been suppressing for years and even though they’ve been through some rough waters this season, those feelings haven’t gone away. Since Harry doesn’t seem to want to stick around and attempt to make his marriage work, whatever his reasons may be, she decides that maybe she should give things with Dom an honest try, if only to make sure that they made an effort and didn’t let their fling define their relationship to one another. But with Harry’s restaurant falling apart and him more determined than ever to find out the paternity results, will he be so quick in leaving her life and allowing her the freedom to date around?

Elsewhere on Mistresses, a ruling is delivered in Elizabeth Grey’s case against Karen, while Paul helps April look for Lucy and Joss attempts to salvage her relationship with Alex after cheating with Olivier.

Mistresses airs Mondays at 9:00 on ABC.

Do you think that Harry and Savi will stay together, even if it’s out of convenience and for financial reasons? Was Joss in the wrong to sleep with Olivier? Will Karen emerge triumphant in her case with Elizabeth Grey?