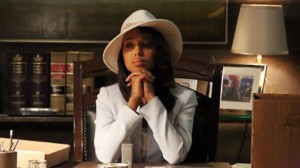 ABC will be running hour-long recap specials the same night of the third season premieres of Once Upon a Time and Scandal as quick refreshers before the action picks up again.

On Sunday, September 29th at 7:00, Once Upon a Time: Journey to Neverland will recount the important events of the fantasy drama’s second season, including how the show made it to Neverland in the first place. Once Upon a Time‘s premiere will then follow at 8:00. Thursday, September 3rd will see the debut of Scandal: The Secret Is Out at 8:00, leading into a new episode of Grey’s Anatomy and the season premiere of the much buzzed about Shonda Rhimes drama. In the second season finale, Olivia’s biggest secret, which could crush her professional career, was revealed and the third season premiere is said to jump ahead only 22 minutes after she learned about the leak.

The network hasn’t been shy about cobbling together recap specials for its serial dramas, though in recent times, they tended to occur during the season and replaced a planned rerun. The first seasons of Revenge and Nashville both had midseason recaps narrated by characters as a way to cut down on reruns and offer a creative way to make sure the audience is up to date on everything that had happened, thus avoiding confusion, complaints of erratic scheduling, and people dropping the show. No details have been released yet about how Journey to Neverland and The Secret Is Out will be assembled, e.g.  who will be narrating, if there’ll be any interviews, what they’ll focus on heaviest, etc.

The pair of specials join The CW’s Arrow: Year One as recaps meant to boost casual tune-in for the promising dramas and stave off the audience erosion that has been plaguing broadcast for quite some time.

Will you be watching either recap special? Are you glad to have them as a resource, just so your memory will be jogged and certain plot points won’t be as hazy? Should more networks assemble recap specials, either online or on screen, for their more serialized dramas?