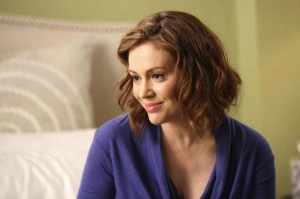 Alyssa Milano has revealed that she won’t be returning for the third season of ABC summer soap Mistresses, citing the show moving production to Vancouver conflicting with her responsibilities her two young children.

Sadly, I won’t be returning to #Mistresses. Here’s why: http://t.co/Xq3jTTSGfH

It’s as yet unclear how the show will deal with the loss of arguably its central character, be it through writing Savi out or recasting the character. Also to be determined is whether Milano will be open and able to appear at all during the third season and beyond, even if it’s to provide some sense of closure for her character.

Though understandable due to logistics, Milano’s exit is quite surprising considering that the show spent season two building to a third season centered around the clash between Savi and Joss over what happened with Harry. Even disregarding the issues of rhythm the show will have to deal with now that they’re down to three leads, the third season will likely have an entirely different structure, with Savi’s abrupt exit putting more weight on other storylines and leaving the show without the conduit that led to this group becoming friends. What will likely be employed now is a time jump, with Savi’s absence being exposited and likely becoming the driving force behind the season, particularly regarding Joss’s guilt and the amorphous blob that the group will turn into without her around.

The third season of Mistresses is slated to premiere next summer on ABC.

Are you surprised that Milano won’t be continuing on with Mistresses? How do you think the loss of Savi will change the dynamic of the show? Can Mistresses be Mistresses with only three leads instead of four?