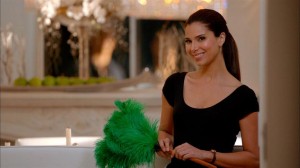 For the first few months of her time working for Alejandro, Carmen felt uninspired professionally and personally, as he was much more guarded than she had anticipated and the continued conflict with Odessa made her job that tenser. However, in recent episodes of Devious Maids, Carmen finally broke through with both Alejandro and Odessa, giving him the reality check he needed when it came to Odessa’s cancer diagnosis and assuring the former ballerina that she didn’t have to go through terminal illness by herself. It showed her that there was more to the people she had spent so much time with than meets the eye and that if you give someone enough of a reason to open up, they’ll put their trust in you and show you who they truly are.

On the next episode of Devious Maids, though, that has come back to bite Carmen, as Alejandro revealed that he’s gay and that the back waxing was to please his boyfriend, not the pretty little co-ed that she was expecting. As forward thinking of a woman as Carmen has shown herself to be, considering her focus on her career and becoming the type of singer that she envisions herself to be, she has a decidedly conservative attitude toward Alejandro’s love life and makes her dissatisfaction with it known. But is it necessarily her place to say something? Granted, he told her that he needs her to give him the kick in the butt that he deserves sometimes, but it’s one thing to call out someone for being spoiled, inconsiderate, and uncaring and it’s another to “disagree” with a part of their identity. Has Carmen overstepped the tenuous boundaries between herself and Alejandro?

Elsewhere on Devious Maids, Marisol gets closer to the truth about who killed Flora, while Rosie cleans up a serious mess at the Westmore house and Zoila doesn’t trust Genevieve’s rekindled romance with philandering Philippe.

Do you think that Carmen has a right to offer her opinion about Alejandro’s new relationship? What type of mess will Rosie have to clean up? Will we find out Flora’s murderer on the September 15th season finale of Devious Maids?