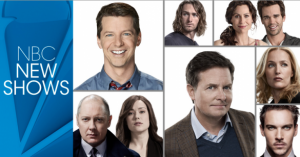 NBC has uploaded its annual Primetime Preview Special, this year hosted by Sean Saves the World star (and Grimm producer) Sean Hayes, returning to the network as a series regular for the first time since Will & Grace went off the air. In the 24-minute video, the entirety of the NBC fall 2013 lineup is previewed through clips and “auditions” that Hayes underwent to be a part of each show, from a botched vocal on The Voice to a “shared scene” with Blair Underwood on Ironside and screen test for Dracula that found the new teeth proving to be too much. Joining Hayes on the preview special are Sean Saves the World co-stars Linda Lavin, who plays his mother on the upcoming comedy, and Reno 911 alum Thomas Lennon, set to portray Hayes’ boss.

The NBC schedule does have the potential to get them moving in the right direction, with well-received thriller The Blacklist getting a boost from The Voice, Chicago Fire hoping to be jump started by the Voice results show, and Friday finally utilizing the Grimm lead-in on an inexpensive Dracula co-production. However, there are still enough questionable moves (three new comedies on Thursdays, with Michael J. Fox not at 9:00; a new show after a weakening Law & Order: SVU; Revolution made to stand alone on Wednesdays) that while they may improve, they might not do a total about-face in momentum just yet. But NBC has been in such a lull for so long that if they can keep The Voice the behemoth that it is, at least one of their new shows pops, and football has a good season in terms of interest, this fall can be a major win for them.

You can check out NBC’s fall 2013 premiere dates here, as well as its full 2013-2014 schedule here and trailers for the fall programming here.

What will you be watching on NBC this season? Do you think that the network can improve its ratings woes from last season? Which of the network’s new shows is the most likely to breakout and become a legitimate hit?