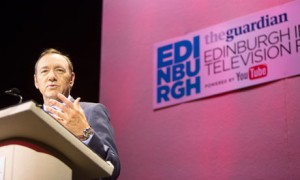 On August 23rd actor Kevin Spacey gave the keynote James MacTaggart Memorial Lecture at the Ediburgh International Television Film Festival. In his statement, Spacey urged television networks to put control in the hands of the viewers.

Eloquent and candid, Spacey, who is the star of the Netflix produced hit House of Cards, spoke about how his show differs from “traditional” television consumption. Now, I put “traditional” in quotes because with today’s changing trends and forms of media delivery, what we think of as traditional is becoming less that, and more of just another option when it comes to watching television. Which is exactly what Spacey was referring to when he said the following:

“The device and the length are irrelevant. The labels are useless.”

And it’s true. With the increasing normalcy of smart phones and tablets, and the number of people with Netflix and Hulu+ subscriptions, our habits are changing. Now, that’s not to say that any medium is better or worse, because we all have our own preferences.

But how does this pertain to putting control in the hands of the audience? Well, as Spacey seems to think, mediums such as Neflix offer that control…because we can binge. Binge viewing, if you’ve never heard the term is exactly what it sounds like – watching hours and hours on end of a show without really stopping. Putting your life on hold for four days to power through a series. But…is that really having control? Being able to watch how much you want whenever you want? Sure, I can understand the attraction of having 13 episodes of House of Cards right there to watch at your discretion, but does it really make regular weekly viewing habits any less appealing?

Is there a mass exodus of cable viewers coming because Netflix has full mini-seasons of streaming?

The logical leap to me would be to say that having Netflix and Hulu-streamed programming only adds to the many, many shows already out there on broadcast and cable networks to enjoy – not makes them less valuable to the audience.

So then, what is this “control” Kevin Spacey speaks so highly of?

Well, to be perfectly honest I don’t really know. I can’t put my finger on one exact definition because as the public, the audience, the consumer – you already have the control. The audience has the power to watch NCIS or change the channel, thus sending the message to the network that you do or do not like what they’re giving you. You decide to pay the $8 a month for Netflix or Hulu, or not. You have email, twitter, facebook, tumblr, the internet at your disposal to express opinions about what you watch, and though you may not realize it – content creators pay attention.

So it was when Spacey said that “audiences just want stories” – I agreed. I do want stories. I love stories and I love television.

But I want cable and streaming. ABC and Netflix. Give me youtube and AMC, and USA Network, and TV Land, and ESPN.

Because we already have control over what we watch. We just have to open our eyes to everything we have to watch.